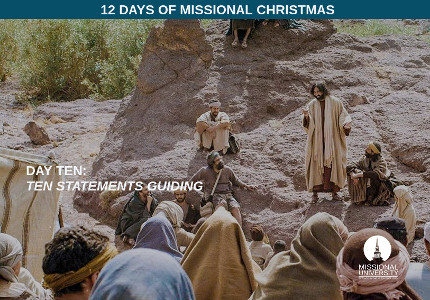 Early in his ministry, Jesus gave the “sermon on the mount” where he laid out statements describing the character of the people of the kingdom of heaven who are “blessed.” He declared that those who are blessed are those who are poor in spirit, mourn, meek, hunger and thirst for righteousness, merciful, pure of heart, peacemakers and persecuted for the sake of righteousness.

In similar fashion in 1805, William Carey and his colleagues, missionaries to India, developed the “Serampore Covenant” which described the character of the relationships between themselves and the people they served in the mission of God. This declaration of missionary strategy has served as a cornerstone document over the last two hundred years.

At Missional University we also have developed “guiding documents” to form the biblical, theological, missional, and practical foundation upon which we stand – to which all faculty, staff and board members ascribe. Our Ethos Statement is based on the Serampore Covenant developed by William Carey consisting of 10 principles that guide our relationships with one another and to those for whom we serve in the mission of God. Our Faith Statement is the Lausanne Covenant which was developed by the Lausanne Movement that was started in 1973 by Billy Graham and John Stott.

Won’t you support global missional education that stands squarely on the Word of God and equips grassroots leaders to serve in the mission of God in the world?

Check out our
GUIDING DOCUMENTS

Four Educational Levels On that eventful Christmas night, the shepherds received the birth announcement. The message did not come to the powerful and prestigious – but to the people on the fringes of society without extensive education and financial resources. God’s offer of “good news of great joy” was to be “for all the people” […]

Nine Experiences Learning Along with teaching in the synagogues, Jesus created learning experiences for his followers. He taught spiritual truths from everyday life using parables, shocking statements to gain attention, catchy sayings and word plays, poignant questions, and repetition. He taught by example and by practical assignments for his followers with reports on their application. […]